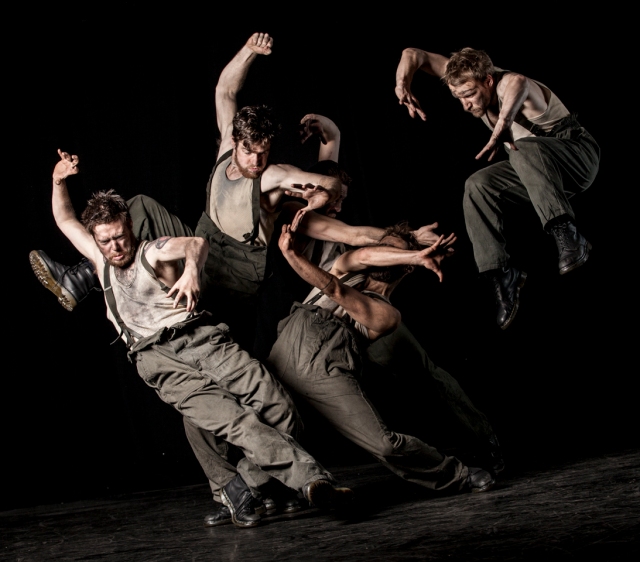 The miners’ strike of 1984 and 1985 was the beginning of the end for many mining communities in the UK, and the subject is still an open wound; any remaining pitheads stud the landscape like headstones to an industry brought to an acrimonious conclusion.

Gary Clarke Company’s COAL is making its way around the country, and includes brass bands and a handful of women from the locality of the home venue to further cement the community feel to the performance.

Over three acts, the grime of a miner’s lot is presented in contemporary dance, with the final act depicting the impact of Prime Minister Margaret Thatcher’s lasting legacy as Iron Lady to the coal industry’s men.

Beginning with a comedic, if rather over-exaggerated scene of The Miner’s Wife (T C Howard) getting her husband ready for another day down the mine, the slapstick elements are well received by an amused audience.

There is a nice camaraderie during Strauss’ “Radetzky March” as the five miners (Alistair Goldsmith, Nicolas Vendange, Beno Novak, Joss Carter and Parsifal James Hurst) make their way to the mine and change from civvies to workwear. It’s all lads together here, with banter and larking about their way of dealing with what’s to come underground.

Act two is the core strength of this show as the miners then descend into their ‘office’: the cramp and claustrophobia of the coal face. Dancers sometimes mimick the machinery, other times show the sheer muscle needed for such a physical job. Their shapeshifting is stunning;  from a collective mass working together to build, extract and heave, to crawling, ground-dwelling, almost reptilian creatures. Their sweat and dirt is real.

Amongst this hard labour, sensuality and eroticism is accentuated by Charles Webber’s particularly effective lighting, feeling the heat and the lack of space amongst shafts of light. Daniel Thomas’s soundscape design uses eerie recordings from The National Coal Mining Museum for England and is awesome in its noise and earthly power—we are as near to Earth’s heartbeat as we can get.

Dangers are ever-present, with a desperate scene as a miner is overcome by black dust to his lungs and the strong bond between men doing hard, difficult work shows itself. As they return to the surface, their wives are there to pick up the pieces; they cleanse their men to “Have a Game for the Crack”, annointing them with their love and care, and share joy ‘down the disco’ with an exuberant “The Wooly Bully”.

Gary Clarke reflects that this show is “not really political nor is it meant to be provocative.” I disagree; act three becomes pantomime as Mrs Thatcher (Eleanor Perry) strides on stage, her grotesque, cartoonish body language and audience’s boos leaving no doubt as to where allegiances lie. The fate of the scab who crossed the line also hammers home the mood of the miners.

Whatever your political views, the strike was a political event, the ideology of the Conservative Party leaving a deep bootprint on the social history and economics of the country. I do agree with Clarke that it is important shows such as COAL keep this piece of history alive for audiences to remember, but if that is the case, the third act relies too much on assumed knowledge of the other side of the argument and the key events of this long, relentless dispute.

That said, COAL’s sense of community and working together is profoundly moving, and a tough, physical reminder of a time and a life that is disappearing into history.